You are here: Home / flash fiction / The Birthday List by Scott Carpenter 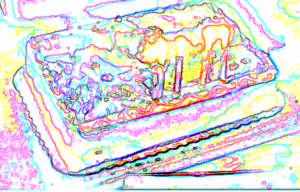 I could use some new socks. You know the kind. And maybe a pair of gloves. I wouldn’t mind a copy of that CD I told you about, the name of which I can’t recall. Perhaps a novel or two, but only if they’re actually worth reading.

Well, I also want to go out. Anywhere. For dinner, a movie, whatever. And not just for my birthday. Generally. I want to go to museums. I want to learn things. I want a change of scenery. I want to move.

And how about a new pen? A nice one, preferably blue, with a fine point. I’ll need some stationery to go with it. Some Post-its, so I can leave you notes. I want a phone. One that works. Or a megaphone. Walkie-talkies. I want two empty tin cans tied together by a waxed string.

What I’m trying to say is that I want you to listen to me.

And for me to listen to you.

I want us to look at one another. I want us to stop walking through each other’s shadow feeling nothing more than a chill.

I want a new job. I want friends again, the kind who stay up all night talking. I want to be younger. I want to turn off the news. I want not to worry about the future of the planet. I want politicians to stop being idiots.

I?d like to feel at home. I want you to love me the way you used to. And I want to return the favor.

I want our dead to be alive again. I?d like my whole life resuscitated. I want not to have wished for that. I want to forget. I want to remember. I want to live forever. I want to die, right now.

I want to know what happened. What I did. What I can do.

I want to know why it turned out this way. I need to know if it’s too late.

I wish all this could go without saying. If only you could read my thoughts’ then at least one of us would understand.

Since I have lost nearly everything, all I really want is: something. I’m afraid I can’t be more specific. Whatever you think will work. Nothing too expensive.

Oh, and if at all possible, I’d love for it to be a surprise.

When not burnishing his own prose, Scott Carpenter is up to his elbows in that of others, mostly in courses at Carleton College (MN), where he teaches literature and literary theory. A writer of both fiction and non-fiction, he has published a score of essays? (not to mention a volume on literary hoaxes), and his short stories have appeared in such venues as Ducts and Lit-Cast.