You are here: Home / Featured / The Girl Who Had Everything Places an Ad By Deborah Nedelman 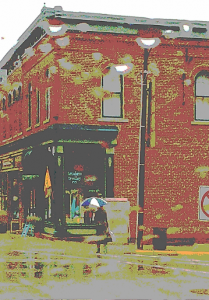 The Girl Who Had Everything Places an Ad

Chauncey School for Girls
Alumnae listserve
For Sale: couture wedding gown size 4
Light ivory silk with a high neck ruffled collar with hand appliquéd beadwork. 42 covered buttons down the back, lace embellishments. Hemline carries a 5”flounce and short train.  Original cost: $6800. Asking $1500. Because this is genuine couture, it isn’t possible to give a size in the ordinary sense, but 2 to 6 seems right. If you e-mail me I will send pix! “ S.G. class of ‘60

She’s 68 years old now, probably last wore a size 4 three decades ago. What else has she had to sell? The haute couture of her life? The rings, the silver service, the Benz? What happened to the daughter who was supposed to take up the train and parade down the isle? Living with her girlfriend in the Haight? Sworn off attachments all together? Wouldn’t be caught dead with deodorant on let alone peau de soie?

“Email me and I will send pix!” It’s the exclamation point that pierces the heart of the plea. What courage did it take to write that ad? Did she do it as a lark or did she just need to be rid of reminders? Finished with that marriage, that hope, that fantasy. Wiping her hands and brushing off the last vestiges of gathered flounce and lace embellishment. Fuck those 42 covered buttons!

On the other hand maybe her closet is just too small; her daughter married up and is a size 16 anyhow. Or it’s the idea that someone else might enjoy it–this is charity–giving to the poor bride who can only afford $1500. What a windfall for that sad girl.

Then there’s this: she’s finally admitted she loves women. She’s found someone who can love her the way she’s always wanted to be loved. Her husband has grown limp and cold and has never seen her as more than arm candy anyway. The kids are distant and careless. Now is her time. But he’s cut her off, of course. He can’t just pay her to leave him, that would look so pathetic. This is her final revenge: sell the rag his mother chose for her, the gown that cost a queen’s ransom—better yet, give it away at a bargain price.

But here’s the most likely: The Mr. Right who kissed her after the “I do” has shown his true colors. He was so handsome and bought her deliciously expensive gifts. She tried to look away, has done for years, but that has not meant innocence. Once the indictment was filed and the lawyer hired, she couldn’t pretend any longer. The bank accounts have all been seized; the off-shore ones with their secret numbers are her only hope, but she’s being watched so closely now. What’s a girl to do? Her fancy education has finally paid off. Tap into her own network. Sure, those girls can afford an original, but just think—recycled. Isn’t that the word?

Deborah graduated from Bryn Mawr College and earned a Ph.D. in clinical psychology at the University of Washington. She worked as a psychologist for 30+years before giving herself the gift of writing full time. She is currently an MFA student at the Whidbey Writers Workshop of the Northwest Institute for Literary Arts and writes fiction and poetry. Deborah is also a certified Amherst Writers and Artists group leader and facilitates groups at:www.Soundviewwriters.com. She is co-author of: Guide for Beginning Psychotherapists, published by Cambridge Press and Still Sexy After All These Years: The 9 Unspoken Truths About Women’s Sexual Desire Beyond 50 published by Perigee/Penguin. Her short fiction appears in Contemporary World Literature(www.contemporaryworldliterature.com) and Persimmon Tree (www.persimmontree.com).She lives in Mukilteo, Washington with her husband and her standard poodles. She is incredibly grateful for her two children who are changing the world for the good.