You are here: Home / Featured / A Narrow Bridge by Avital Gad-Cykman 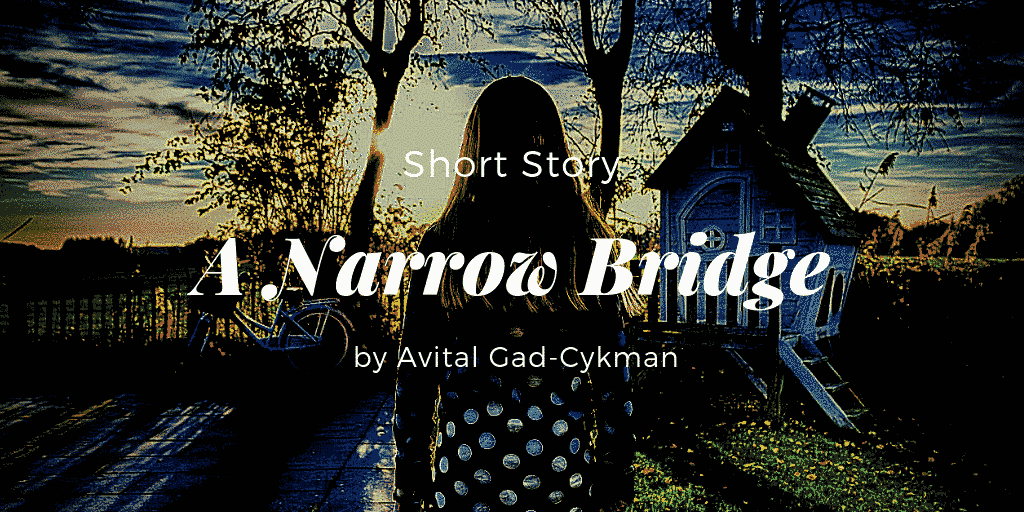 I’ve sang this ancient song in moments my mouth started singing on its own, and I listened with interest to learn what would come out of it.

It’s so narrow, my backyard is bigger.

My children are playing in it, in and out of a blue plastic basin. They have been laughing but now they are fierce as they always are in their disputes against one another and for each other when the neighbors’ children threaten one of them. Their shouts are so piercing I find it a miracle that their tiny bodies are capable of producing them.

I step out, but their wrath dissolves at once as the cookie in question drops from their hands into the water. They stand side by side to observe it as it drowns. When it’s completely sunk, they fish it out, split the wet bits between them, test and taste it like scientists at work.

And then the air freezes and explodes with noise, smoke and fire. A field behind the house is burning. Every dispute has two sides, I know. Don’t tell me on whose side I need to stand. I care about mine now: my kids are in danger.

My body produces fiercer shouts than theirs, as I gather them in my arms, checking they are fine, although the explosion was not in my backyard. You never know what could fly and hit you.

They are screaming, so I calm down and sing:

She is a three-time Pushcart prize nominee. Her story collections “Light Reflection over Blues” and “Perfect for This World” were finalists for Iowa Fiction award.

She was born and raised in Israel, and now she resides in Brazil.